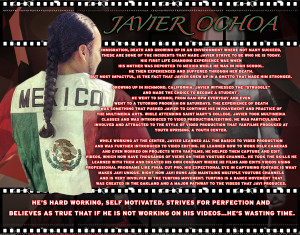 Javier Ochoa is a filmmaker and cinematographer from Richmond, CA. At an early age, Mr. Ochoa was tremendously influenced by his experiences with immigration, death and an environment where many not succeed.  The first challenging life experience Mr. Ochoa faced in his life came during high school, when his mother was deported to Mexico.  Soon after, his mother died and he continued to struggle providing for himself while living in the inner city of Richmond, California.   Growing up in a violent neighborhood, Mr. Ochoa had to prioritize his education in order to survive.

Being constantly surrounded by death continued to influence Ochoa as he began to study multimedia and film production.  While taking classes at non-profits in the Bay Area, he was introduced to a group of filmmakers in Yak Films who influenced his style and mode of production.  Mr. Ochoa's  artistic education with this group and later completed his Bachelors of Arts in Communications at St. Mary's College of California.  In 2011, he  eventually founded his own independent film company, High Voltage Films.